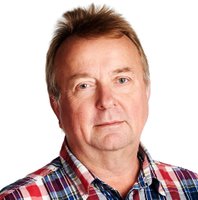 Grown up in Malmberget, I'm a big fan of skiing and spent a great deal of my childhood on the slopes on and near Dundret. Despite being born in 1956 (like Björn Borg, Ingemar Stenmark, Thomas Wassberg, Linda Haglund and Frank Andersson) I didn't end up rich and famous - but I've kept on skiing ever since. During the short period when skiing was bad up north, I spent most of my time and money on motorcycles, darts and music - I founded two dart clubs up north, played in a few bands and had (at the most) three motorcycles.

I left Lapland in 1994 and have lived in the Stockholm area since (except for a short period in Karlstad). I still ski, ride motorycyles and play some music (albeit not in a band), but I also picked up disc golf - a fantastic way to spend a summer day, especially since we happen to have one of Europe's best courses nearby (Järva Discgolf Park). I also enjoy cooking - I'm not a good cook, buy I like fiddling about in the kitchen.

Professionally, I'm a geek. I've spent my entire life in the computer and IT industry, most of the time as a software developer. Read more about the professional me on p2r.se or LinkedIn.